Phone: (419) 994-4290
Reservations: 866-644-6727
Mohican State Park and the adjacent state forest are outstanding in their beauty and offer limitless opportunities for visitors to explore one of Ohio's most unique natural regions. The striking Clearfork Gorge, hemlock forest and scenic Mohican River offer a wilderness experience while the resort lodge and cottages provide luxurious accommodations.
Park Map (pdf)
Nature of the Area
The scenic beauty and natural features of the Mohican region can be attributed to events that occurred over 12,000 years ago during the ice age in Ohio. The last glacier to enter Ohio, the Wisconsinan, ended its advance in the Mohican region forming a glacial boundary. Several moraines, linear ridges of soil and rock till deposited along the ice edge, are evident in the area.

The erosional forces of glacial meltwaters hastened the carving of the narrow gorge of the Clear Fork of the Mohican River. This gorge cuts into the sandstone bedrock exposing huge outcroppings and creating steep cliff walls. The gorge is more than one thousand feet wide at the top and over three hundred feet deep. The striking Clearfork Gorge with its towering hemlocks and stands of old-growth white pine are of national significance. The National Park Service has thus dedicated the area as a Registered National Natural Landmark.

The Mohican State Memorial Forest surrounds the park and contains great plant and animal diversity. Ridge tops contain stands of white, red and black oaks, red maple and white pine. Beech, ash and tulip can be found in the middle and lower slopes with hemlock and yellow birch. The bottomlands contain sycamore, willow, buckeye, hawthorn and dogwood. The diversity of ferns in this region is astounding with as many as fifteen different species identified, including the rare walking fern.

Mohican is home to numerous mammals including raccoon, white-tail deer, skunk, opossum and red fox. Reptiles such as the box turtle, black rat snake and the poisonous copperhead are present in the area. Dusky salamanders, American toads and the gray tree frog are samples of local amphibians. The wild turkey has made a tremendous comeback in Ohio after being totally extirpated at one time. Significant numbers of this magnificent bird can be found in the surrounding forest.

Of particular interest is the abundance of nesting warblers in the Clear Fork Gorge. More than fifteen species including Northern Parula, Hooded, Cerulean and American Redstart nest here during spring and summer.
History of the Area
The Mohican State Park area was once the hunting grounds of the Delaware Indians, whose more famous warriors included Janacake, Bill Montour, Thomas Lyon (reportedly the ugliest man alive!) and James Smith, who was the first white man to come to this area. Smith was captured by the Indians and later adopted into their tribe. Several Delaware villages were located in the Mohican vicinity. Settlement by non-Indians began at the turn of the nineteenth century, but settlement did not increase until the Indians were driven from the area during the War of 1812. John Chapman, immortalized as Johnny Appleseed, frequented the region during the 1800's, caring for his apple tree nurseries. His name and the date, carved in the wall of Lyons Falls, were an attraction for years. Unfortunately, the etchings have been obliterated with the passage of time.

Prior to 1949, most of the area that comprises the present Mohican State Park was part of the Mohican State Forest (also known as Mohican State Forest Park). The forest lands were administered by the Ohio Division of Forestry. In 1949, when the Ohio Department of Natural Resources was created, Mohican and several other state parks were developed from existing state forests. The new park was named Clear Fork State Park. Years later in 1966, the name was changed to Mohican State Park in order to alleviate confusion between Mansfield's Clearfork Reservoir and the state park. Even before this official move, visitors referred to the area as Mohican.
Passes
Ohio does not have an annual pass and does not charge entrance fees to state parks.
FACILITIES AND ACTIVITIES OVERVIEW
GeneralLand, acres1,110
Nearby State Forest, acres5,109
Day-UseFishingyes
Huntingyes
Hiking Trail, miles13
Backpack Trailyes
Picnickingyes
Picnic Shelters, #4
Bridle Trailsyes
Nature Centeryes
Nature Programsyes
CampingPrimitive, #35
Electric Sites, #118
Full Hookup Sites, #33
Pets Permittedyes
Flush Toiletsyes
Dumpstationyes
Showersyes
Camp Commissaryyes
Camper Cabins, #2
Group Camp, capacity100
Campground Poolyes
Rent-A-Teepee, #2
Walk-In Campsites, #12
WinterSnowmobilingyes
AccommodationsLodge Rooms, #96
Family Cottages, #25
Game Roomyes
Indoor Swimming Poolyes
Tennisyes
Outdoor Swimming Poolyes
Restaurantyes
Cottages
Twenty-five family cottages are located along the river in a wooded area. Each of the cottages will accommodate six people. The cottages are heated for year-round use and contain cooking utensils, towels, bed linens and blankets.
Camping
The family campground at Mohican offers 153 campsites with electricity, fire rings and picnic tables. Full service hookups are available at 33 campsites. The main campground is equipped with showers, flush toilets, dump station and a camp commissary. A second campground with 24 sites has pit latrines, tables and firerings. The group camp can accommodate organized groups of up to 100 people.
Campground Map (pdf)
Lodge
The lodge at Mohican offers luxurious seclusion and comfortable resort accommodations. There are 96 air-conditioned rooms, each with a private balcony and color television. The lodge is equipped with private meeting and banquet rooms for groups up to 425, a dining room, sauna, gift shop, lounge, and olympic-size indoor and outdoor pools.
Nearby Vacation Rentals
Search for a vacation rental

Swimming
An olympic-size pool is located in the campground for use by campers and cottage guests. Lodge guests may use the two pools located at the lodge.
Canoeing
The Mohican River, which flows through the park, is one of the finest canoeing rivers in Ohio.
Location
Mohican State Park is located near Mansfield, Mount Vernon and Wooster
Nearby Parks

Killbuck Marsh State Wildlife Area
Picnicking
Picnic areas are located around the park and offer tables, latrines and drinking water. Four shelterhouses may be reserved. Contact the park office for details.
Trails
Over twelve miles of trails take the visitor to the more interesting areas of the park and forest. Lyons Falls trail follows Clear Fork Gorge and features two waterfalls. The Hemlock trail leads to the scenic wooden bridge, and Pleasant Hill trail follows the lake shoreline and offers beautiful views of the lake. Other trails are available in the adjacent state forest for horsepeople as well as hikers.
Trail Map (pdf)
Area Attractions
Malabar Farm State Park which is northwest of Mohican was the home of Louis Bromfield -- noted author, farmer and conservationist. Visitors can tour Bromfield's "Big House" or take a wagon tour of the farm. Mohican State Memorial Forest, located adjacent to the park, offers public hunting and trails for horseback riding, snowmobiling and hiking. Fowler Woods State Nature Preserve which is north off State Route 13, is a mixture of mature beach-maple forest and swamp forest. There is a rich display of spring flowers in the woods. Visitation during daylight hours only.

Picnic tables and grill sites are located in scenic areas throughout the park. A concession stand offers limited picnic supplies. Fires are permitted only in the grills provided.
Things To Do in the Area 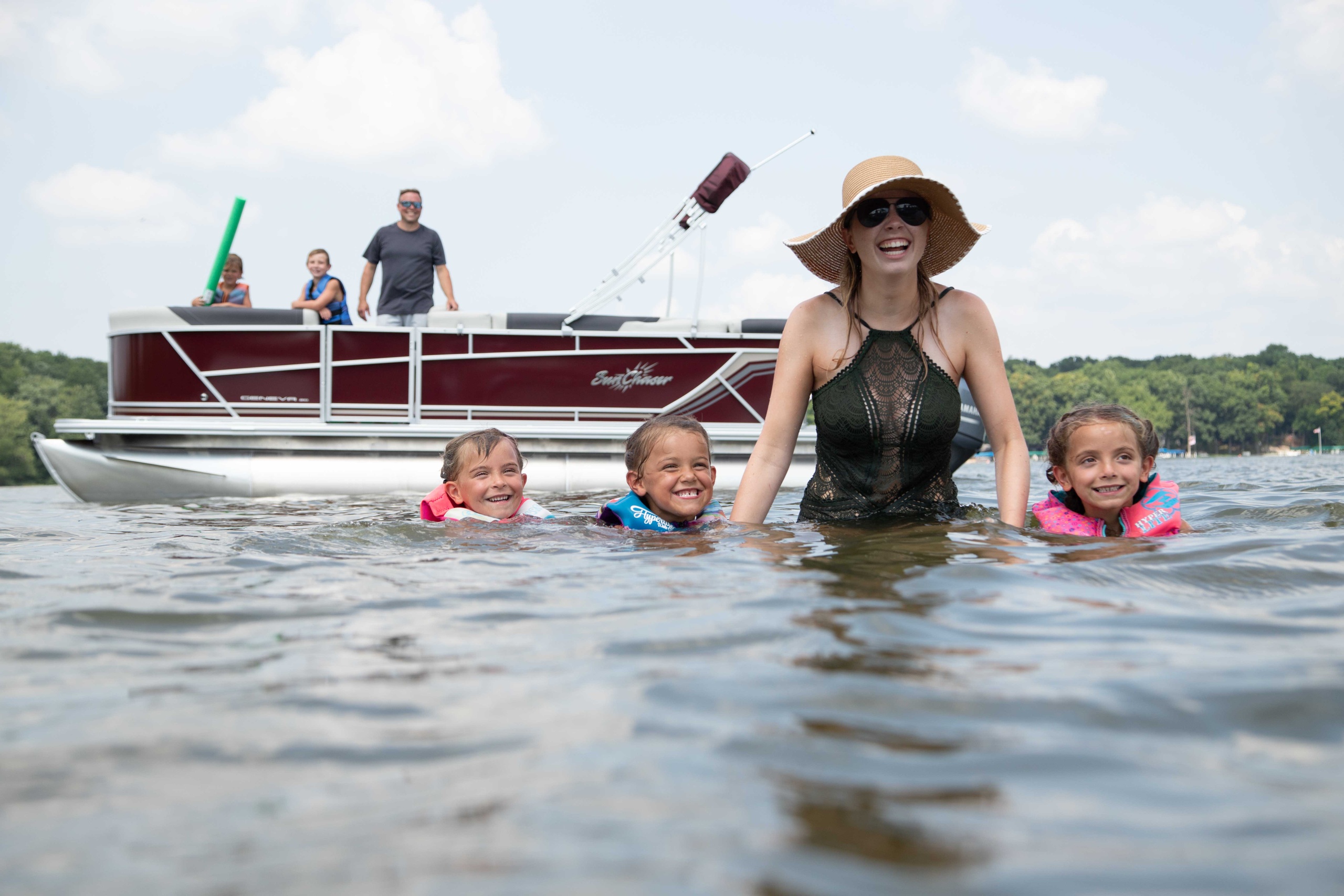 My family lived in Lexington from around 1958-1963 and we often picnicked at Mohican State Park. Have many great memories of this place.
August 10 Our favorite place by The Starkeys

We have been coming here for the past 6 years. my husbands family every year for almost 40 years. This is a great park. beatuiful area. a must do!!!
January 11 A great place to hike and get away. by string bean

I,ve been hiking in Mohican for several years and it never seems to amaze me to what it has to offer in all seasons. Winter is one of my favorites because your alone to enjoy nature at its rawest form.

Hidden Cave Cabin - Rockbridge, OH
Cottages and Cabins
Hidden Cave Cabin is an authentic log cabin with 2 bedrooms in a private wooded setting. It is located on one of the most scenic drives in Hocking Hills and just 3.6 miles to Rock House and less than 10 miles to Conkle's Hollow and Old Man's Cave.