Over 20 distinct biological communities provide a rich array of habitats for wildlife, including alligators, bison, wild horses, and over 270 species of birds. Exhibits and an audio-visual program at the visitor center explain the area?s natural and cultural history. A 50-foot-high observation tower near the visitor center provides a panoramic view of the preserve.

Eight trails provide opportunities for hiking, horseback riding, and bicycling. Ranger-led activities are offered on weekends, November through April. Fishing on Lake Wauberg is allowed and a boat ramp provides access for canoes and boats with electric motors. Gasoline powered boats are not allowed. Full-facility campsites are available for overnight visitors. Located on U.S. 441, 10 miles south of Gainesville.

Nature of the Area
There are over 420 vertebrates identified in the park and over 270 of them are birds. Paynes Prarie is part of The Great Florida Birding Trail. There are many observation platforms and wildlife viewing areas located throughout the park. Some of the animals commonly seen in the park include: sandhill cranes, bald eagles, alligators, otters, deer, bobcat and snakes.
History of the Area
Paynes Prairie became Florida?s first state preserve in 1971 and is designated as a national natural landmark. This site possesses exceptional values as an illustration of the nation?s natural heritage and contributes to a better understanding of the environment.

The prairie basin and surrounding uplands have been a center for man?s activities in Florida for many centuries. Human occupation dates back to 12,000 BP (Before Present). During the late 1600?s, the largest cattle ranch in Spanish Florida operated here. In 1774, William Bartram described the basin as "the Great Alachua Savannah." The Seminole were the native inhabitants then, and the prairie is thought to have been named after King Payne, a Seminole Chief. Several raids and skirmishes were fought in the vicinity during the Second Seminole War.

In 1871, heavy rains began to flood the basin. By 1873, the flooded marsh was large enough to be considered Alachua Lake. Steam-powered boats traveled across the lake to transport lumber, goods and passengers to landings along the shoreline. In 1891, Alachua sink, the main drain for the basin, became unclogged allowing the water to drain. By 1892, the character of the marsh had returned. In 1903, William Camp began cattle operations on the lush, green grasses of the prairie.
FACILITIES AND ACTIVITIES OVERVIEW
Day-UseFishingyes
Hiking Trailyes
Swimming Beachyes
Bike Trailsyes
Bridle Trailsyes
BoatingLaunch Rampsyes
CampingWater/Electric Sitesyes
WinterActivitiesyes
Visitors Center
A visitor center is open from 9 a.m. to 4 p.m. daily. Several exhibits and an audio-visual program interpret the natural and cultural history of the preserve.
Camping
Full Facility Camping is available for tents, trailers or motorized vehicles up to 40' long. The tent sites are walk-in sites a short distant from the parking area. Each site has a lantern post and picnic table with nearby water and electric service.

Reservations must be made 48 hours in advance either in person or at the Ranger Station between 8:00 a.m. and 5:00 p.m. daily or by calling
Canoeing
Canoeing is available on Lake Wauberg which covers about 300 acres. There is a public boat ramp located on the east side of Lake Wauberg. There are no canoes for rent at Paynes Prarie.
Fishing
Fishing is permitted on Lake Wauberg, an approximately 300-acre lake. Bass, bream, and speckled perch are regularly caught species. Areas for fishing along the bank are limited. Access to the lake is available via the park's boat ramp. The use of gasoline-powered engines is prohibited.
Location
Paynes Prairie Preserve State Park is located near Gainesville, Hawthorne and Newberry
Nearby Parks

Dudley Farm Historic State Park
Picnicking
Picnic tables are located throughout the park. Barbecue grills are located at the Lake Picnic Area as well as by the covered pavilions. For a fee, the covered pavilions may be reserved in advance.
Horse Area
The Chacala Trail is a multi-use trail and is a series of loop trails encompassing 6.5 miles in length. The level trail winds through several distinct biological communities including pine flatwoods, hardwood forest or hammock, baygall, open ponds and old fields. A diversity of wildlife may be observed including deer, bobcat, wild turkey, and the pileated woodpecker. This trail is open to horse, bike and foot traffic. This trail is accessed from the main park entrance.
Trails
LA CHUA TRAIL The LaChua Trail is three miles round-trip from the North Rim of the Prairie to the observation tower. This trail provides scenic views of wet-prairie and marsh habitat including Alachua Sink and Alachua Lake. Main access is 4801 Camp Ranch Road. LaChua Trail opens at 8:00 a.m. and is open 7 days a week. For safety and wildlife disturbance reasons, the trail closes 1 hour before sunset

BOLEN BLUFF TRAIL The 2.6 mile roundtrip trail is named after a family of pioneer settlers who lived on the south rim or bluff of Paynes Prairie. The trail leads to a wildlife viewing deck after it passes beneath the shady canopy of a hardwood forest dominated by large oaks -- the most impressive of which are southern live oak. Other species of oaks as well as sweetgum, hickory, palm, magnolia and holly trees flourish along the trail. In Florida, communities of broad-leaved evergreens or hardwood-dominated forests are called "hammocks." This name probably originated from early native Americans that inhabited the region. Hammocks grow on high well-drained soils and thus provide an ideal habitat for a large diversity of animal species including Virginia white-tailed deer, wild turkey, bobcat, gray fox, barred owl and raccoon.

Located halfway along the loop-trail is an open, grassy knoll-- Bolen Bluff. The bluff affords the visitor a scenic vista of the low-lying freshwater marsh, wet prairie and open water of Alachua Lake. From the bluff a 0.5-mile spur-trail heads out onto the prairie basin along an old earthen dike. During the 1920-30's, the Camp family constructed an extensive system of dikes and canals into the vast wetland to reduce the flooding and thus create drier conditions for cattle ranching. In 1970 the Camp Ranch was sold to the State of Florida establishing the first state preserve in the Florida Park System.

WACAHOOTA TRAILAbout a quarter mile round-trip. Begins at Visitor Center and loops through hammock to a 50' observation tower along the edge of the prairie. Closes at sunset.

CONE'S DIKE TRAIL This trail is an 8.25 mile round-trip hike from the Visitor Center parking area trailhead. The earthen dike trail travels into the center of the prairie creek waterway. The flat terrain of the basin is quite open and has limited shade for hikers or bicyclists.

JACKSON'S GAP TRAILThis 1.3 mile trail passes through shady hammock and pine flatwoods to connect two of the longest trails within the preserve, Cone's Dike and Chacala Trail.Jackson Gap Trail was named after a pioneering cattle rancher from the turn of the 19th century, Archie L. Jackson, who moved cattle through a gap in the fence where the trail passes near Chacala Pond.Jackson Gap trail connects with Cone's Dike Trail 0.15-mile down the trail. Wetland wildlife that inhabits the area includes sandhill crane, American alligator, egrets and herons, and rails. Occasionally, the Spanish horses or American bison may be seen grazing in the marsh.

Bicycling
Cycling is permitted along the park drive and the following trails: Chacala, Bolen Bluff, Jackson's Gap, Cone's Dike and Gainesville-Hawthorne Trail State Park. Most trails require "fat-tired" bikes.
Nature Programs
*For registered campers only.* Every Saturday evening, from November to February. Enjoy ranger-led campfire programs about Paynes Prairie's cultural and natural resources at the new, Friends-funded campfire amphitheater. Topics vary weekly and may include the Timucua Indians, native medicinal plants, pottery of the past, flint knapping and atlatls, wild horses, bison, cattle and tales of Cracker Cowboys, William Bartram's Travels, wildlife of the Preserve, birds of prey, snakes, alligators, and more. Programs begin at dusk. Bring your marshmallows. The amphitheater is located on the edge of Lake Wauberg to the right of the picnic pavilions.
Visitor Comments, Memories and Reviews 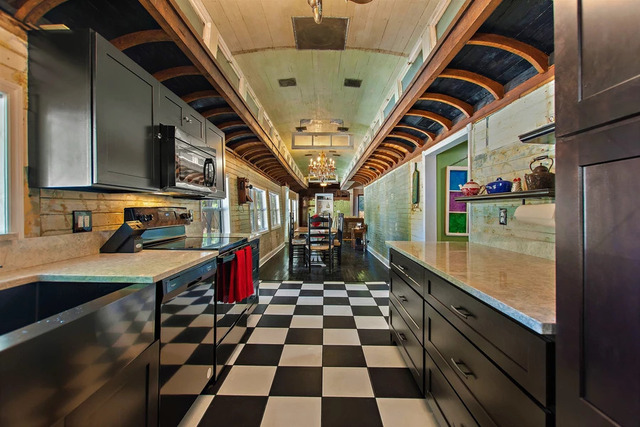 DIRECTIONS
89.2 miles from park*
Nearby Hotels
Booking.com
Pets
Well behaved dogs are welcome at Paynes Prairie Preserve State Park. They must be kept on a hand held 6-foot leash at all times and cannot be left unattended for more than a half-hour. Pets are not permitted in playgrounds, bathing areas, or park buildings. Due to potential conflict with alligators, snakes, and bison, pets are not allowed on the Bolen Bluff Trail, Cone?s Dike Trail, and La Chua Trail.

Pets must be confined, leashed (not to exceed six feet in length) or otherwise under the physical control of a person at all times. Tethered pets must not be left unattended for more than 30 minutes. Quiet hours must be observed from 11:00 p.m. - 8:00 a.m. Pet owners must pick up after their pets and properly dispose of all pet droppings in trash receptacles. Florida law requires that pets be vaccinated against rabies. Any pet that is noisy, dangerous, intimidating or destructive will not be allowed to remain in the park. Non-furbearing pets, such as reptiles, birds, or fish must be confined or under the physical control of the owner. Failure to abide by these rules may result in your pet being prohibited from the park (in accordance with FAC 62D2.014).

Coming from the north on I-75: Take exit 374, the Micanopy exit, and turn left at the end of the exit ramp. You will then be traveling east on CR 234. Stay on this road 1.4 miles until it intersects with US 441. Turn left onto 441 and go 0.6 miles to Paynes Prairie Preserve State Park (on the right).

Coming from the south on I-75: Take exit 374, the Micanopy exit, and turn right at the end of the exit ramp. You will then be traveling east on CR 234. Stay on this road 1.4 miles until it intersects with US 441. Turn left onto 441 and go about 0.6 miles to Paynes Prairie Preserve State Park (on the right).
Nearby Parks